Visit of descendants of the Kraus family: Daughter Lisa came to England on a child transport in 1939, took part in the 75th anniversary in London in 2014 and then returned to her former home in Wieselburg and Oberndorf with her children and grandchildren. Lisa's husband Brinner was a journalist and author of books on Middle East issues and biblical subjects. 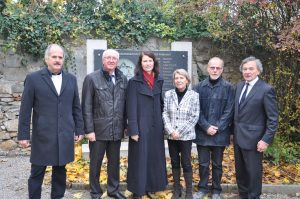 Shoa-Denk.Mal Wieselburg: After several years of planning and financing pledges from the city and rural community and the parish Wieselburg, DI Hannes Scheruga planned the memorial plaque for the Wieselburg Jewish families. The board was made by the company Gröbner. Representatives of the Austrian Kameradschaftsbundes Wieselburg did the necessary construction work. The revelation took place in 2014 with a large participation of the population and their political representatives. The names of the victims were named. The group "Hawara" played Yiddish songs. The funeral prayer Kaddish was spoken. The Wieselburger Lions financed the accompanying brochure "SHOAH-DENK.MAL auf dem Wieselburger Kirchenplatz", prepared by Hannes Kammerstätter at the suggestion of the parish council. At nocturnal church lighting also the names shine on the board. In the morning sunlight, an image of the Star of David appears on the wall behind the monument. 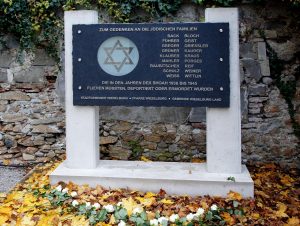 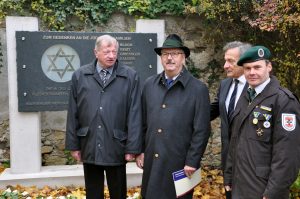