The Jewish cemetery in Ybbs-Göttsbach

A Real Vision - The Project

Restoration of the old Jewish cemetery in Ybbs-Göttsbach and extension to a modern forum of encounter.

The association for the renovation and preservation of the Jewish cemetery in Ybbs-Göttsbach under the chairman Mayor Anton Sirlinger.

The cemetery in Ybbs-Göttsbach is the only Jewish cemetery in Austria before 1900 has a structure intact since its founding in 1894: A ceremonial hall with Tahara and outbuildings (formerly Pförtnerwohnung) and complete cemetery border. A closed formation that has outlived all temporal storms for 118 years. Thus, the cemetery is the only living connection to the former Jewish community of the Mostviertel and the southern Waldviertel in the 19th century. Even famous cemeteries such as Chernivtsi (1905), Prague (1911) or Brno (1900) date from later years and are also incomplete , In Ybbs is surprisingly a small, but important in the Jewish history of Central Europe gem.

Another special feature is the years of history work of Dr. med. Johannes Kammerstätter, who has minutely reconstructed the life of the Jewish community, especially those buried in the cemetery and their relatives. His trilogy is a historical masterpiece in Jewish historical research and will form the basis of a permanent exhibition. Due to the intensive contact - not least in the context of the worldwide acknowledged project "Letter to the stars" - the memory of the descendants of the Mostviertel Jews was revived and something of the homeland was preserved. This revival was supported by the committed work of the youth in the restoration of the gravestones and the initiation of connections through the European Youth Association SANDKORN (currently 20 European and Southeast European states) under the direction of Mag. Wolfgang Wagner.

What is in this vision?

The basis of the "Robert Mahler Forum" is an exact reconstruction of the cemetery building according to the blueprints of 1894. It is not only the external form that must be preserved (this is agreed and approved with the Federal Monuments Office and the Jewish Community Vienna), but also the Modernization of the inner life. This cemetery is intended to be a place of encounter and communication, with the possibility of detailed information, a place of learning and experiencing for young people, a place of reflection, of remembrance and reconciliation and a center for cultural events of the highest standard. 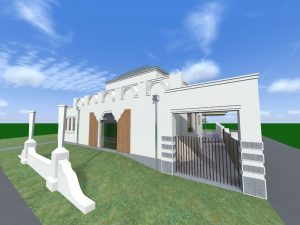 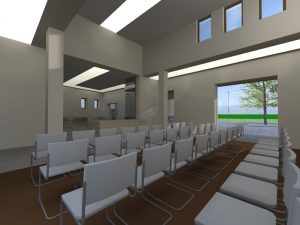 The Jewish Community of Vienna has given us its full consent and cooperation in the sense of a dependance is developing on the part of the famous Jewish Museum Vienna. Further cooperation with the Jewish Center in Lodz (Poland) and the Synagogue in Sarajevo as an Askenasisch-Sephardic axis is in the planning. A central database of Jewish life in the Mostviertel and the southern Waldviertel, the cemetery and the Jewish connections to the SANDKORN countries will be available to visitors. A permanent exhibition deals with the Jewish population of the Mostviertel and the southern Waldviertel. There are also two special exhibitions per year on specific topics. Regular cultural events.